SomeGuy
May 2015 edited April 2017 in Software Spotlights
Since Mirror 1 is still down at the moment, I have chosen an older entry that is also on Mirror 2. There is plenty to say about the older releases, but there are some new things pending. 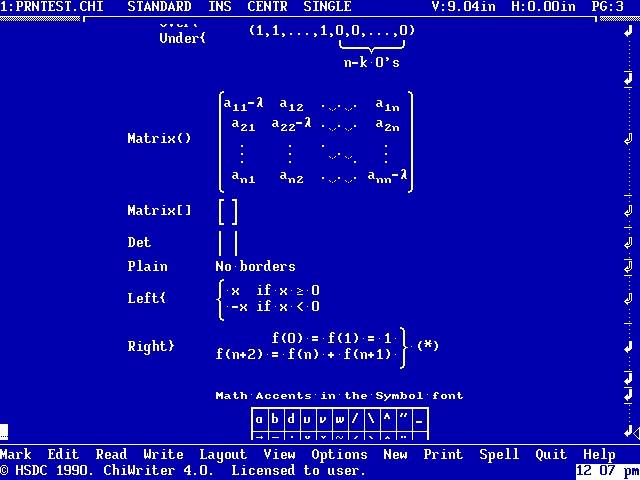 ChiWriter is a word processor for DOS that specializes in mathematical and scientific formatting.

Prior to applications like this, one would have to manually create a text file with markup or formatting codes, and only then feed it to a seperate rendering system or printer to see what it looked like.

ChiWriter is mostly What-You-See-Is-What-You-Get. The symbols are formatted directly on the screen, and appear the same on your printout. It does not, however, calculate formulas.

ChiWriter is relatively easy to use, operated via a menu and keyboard shortcuts. It does lack features common in bigger word processors, such as styles, and earlier versions did not include a spell checker.

It is also very customizable. It is possible to add additional symbols for almost any possible use.

The company that produced it, Horstmann Software, is long since out of business.

Version 4.20B for DOS was the last version, and no version was produced for Microsoft Windows.

WinWorld does not currently have 4.20, however contributions of this or earlier versions are welcome.