MacWrite version 1.0 was released in January 1984 bundled with Apple's brand new Macintosh computer. At the launch of the Macintosh, MacWrite and MacPaint were basically the only software applications available. As such, they were influential in defining what the Macintosh was and how users interacted with it. 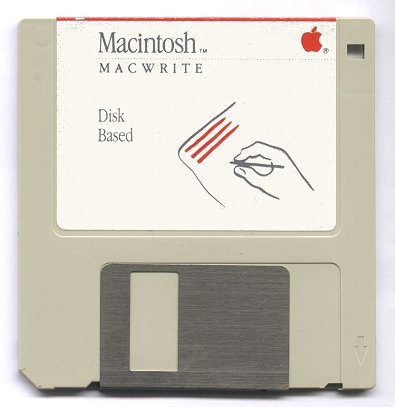 Apple MacWrite is a historically important program. It was one of the first word processors to visually resemble and operate like what people came to expect from a GUI word processor.

Some history sites suggest MacWrite was the absolute first, but LisaWrite on the Apple Lisa did come before MacWrite. Never the less, MacWrite got most of the attention.

I can't think of anything else prior that resembled MacWrite (Or even LisaWrite). Back then there were piles of word processors. Most had many more features and were much more powerful than MacWrite, but were usually character cell based (not GUI) and were command oriented and/or used full screen menus. Typically much more difficult to use. 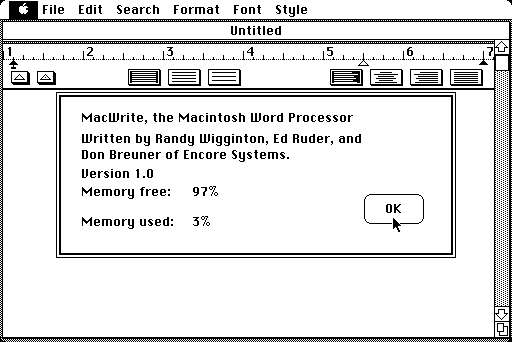 Initially MacWrite development was maintained by Encore Systems, a group of early Apple employees, and later handed off to Claris. During pre-release development, MacWrite was known as "MacAuthor". (Winworld has a version of MacAuthor in the Twiggy Pre-Release.)

Most third party word processors that were eventually developed for the Macintosh heavily duplicated the way MacWrite looked and worked. This included Microsoft's port of Microsoft Word for Macintosh, which was vastly different from its earlier Microsoft Word for DOS.

MacWrite 1.0 was very limited. It could only edit documents that could fit in to free memory, and the original Macintosh hardware was restricted to 128k. This meant documents could only be a few pages long. The ability to keep parts of the document on disk did not come until later.

MacWrite featured the ability to use multiple fonts and embed MacPaint graphics. It displayed the document on the screen in the same way it would appear on paper. (What You See Is What You Get). It supported printing to the Apple ImageWriter dot-matrix printer.

Although the bit-mapped monochrome screens positioned the Macintosh well for desktop publishing, the non-upgradable 128k RAM, lack of a hard drive, and poor interoperability of the original model relegated the early Macintosh to the status of an expensive toy. 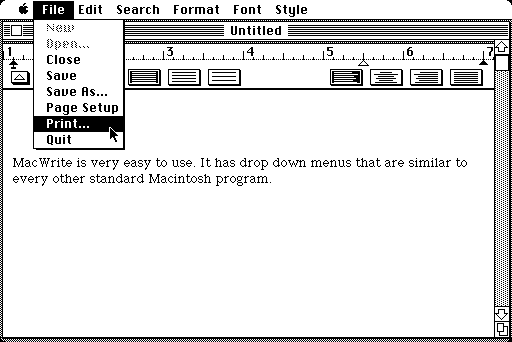 As Apple introduced more powerful Macintosh models, more people took notice. Apple was also one of the earlier adopters of laser printers, which was a good fit for their WYSIWYG word processing. Many word processors were developed for the Macintosh that resembled MacWrite, following Apple's user interface standards. Word processors on other platforms adopted similar standards, such as IBM's Common User Interface standard or Microsoft's Windows interface guidelines.

After MacWrite "1.0" there was a jump to "2.20" when Apple updated their software bundle. The version numbers probably represented internal work, but I'm wondering if Encore Systems made releases publicly available through other means than Apple's software bundle. 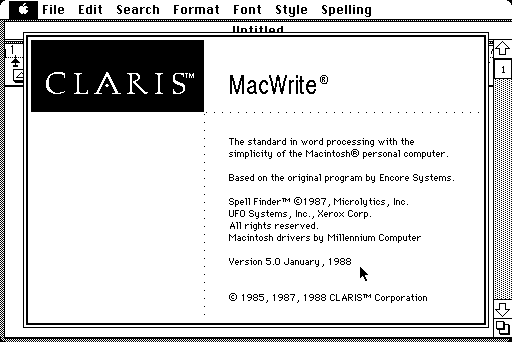 In 1988 with the move to Claris, MacWrite was rewritten and renamed to "MacWrite II" and later again to "MacWrite Pro". But by about that time, more powerful third party word processors had grown in popularity and eaten up MacWrite's market share. This was not entirely surprising as MacWrite continued to position itself as more of an "entry level" word processor. It appears the last version was Claris MacWrite Pro 1.5v3, in June 1994.

The user interface style continued elsewhere until 2007 when Microsoft discarded standard menus in favor of their awful "ribbon" toolbar, and other webby/mobile UI nonsense. 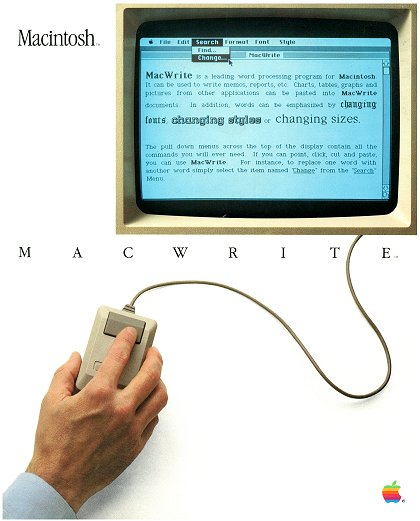 A few other things - I have added a MacWrite 1.0 Manual scan, the MacPaint/MacWrite tour with an MP3 of the cassette, and the Guided Tour of Macintosh also with cassette.

It really blows my mind that with all the Mac fandom that neither the manuals nor the audio cassettes were already out there. The tour disks included audio cassettes that you listened to while the tour plays back mouse movements and keypresses to step trough the applications. A 400k floppy disk could not exactly hold an entire multimedia movie with sound. Tour disks are technically incomplete without their associated audio cassettes.

(Meh, what did you expect from stenkin' Mac users.

Interestingly, there are a couple of difference between the release MacWrite 1.0 software and the 1.0 user manual. Slightly different fonts, and changes to the Find/Change dialog. So, the manual technically shows an earlier development release. These are mentioned on an update leaflet.

Oddly, the Apple documentation states that the MacWrite/Paint tour disk (Jan 1984 Part 690-5006-A) is copy protected. The posted copies do run, and appear genuine and mostly clean, but are not verified as being otherwise untouched. There is no reason why they would have copy protected those disks, I think they were probably just covering up a bug. :P.

And since MacPaint 1.0 is bundled on the same disk as MacWrite, it is worth noting that MacPaint 1.0 will ONLY run on Macintosh 128k, 128ke, 512k, and 512ke machines. It will not run on a Macintosh Plus or later. If you attempt to do so, you will receive the error "There is not enough room in memory for MacPaint".

If I haven't mentioned it before, there is a very good resource for early Macintosh software bundles at EarlyMacintosh.org