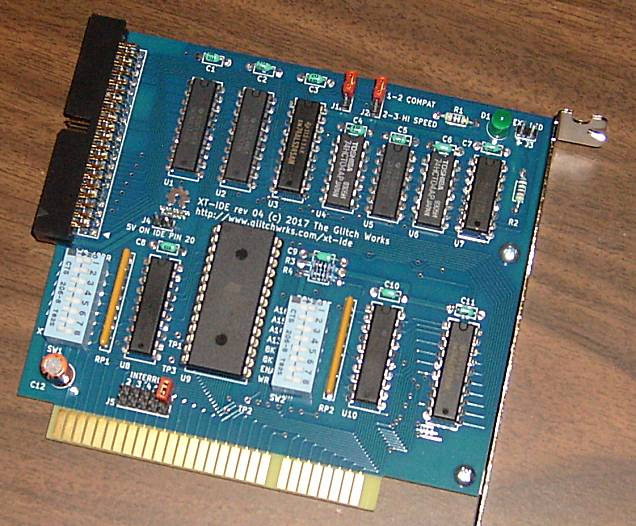 So what do you think of my new XT-IDE card? I bought the kit and put it together myself. Not to hard really, the only issue I ran in to was the solder flowed a tad too easily on the pads and sometimes went through the hole and beaded up a little on the other side. Probably because I'm using a roll of proper leaded early 90s RadioShack solder.

There is no assembly, guide, but it was fairly easy for me. Just had to look up a couple of things to make sure which direction they went. I know how to read resistor color codes, but damn I can't tell yellow, gold, and brown apart. Cheated and used my ohm-meeter to be sure which was which.

Seems to work OK, used it to back up a Tandon 10MB drive that is starting to give me issues.

Tried it on an Athlon KT7A board (one of the last consumer boards with ISA slots) and it created some kind of rom conflict so the motherboard would only boot to its fallback re-flash routing. Probably just need to change the cards address. Need to fiddle with it some more.

It appears to recognize normal IDE drives as well as CF cards fine. The XT-CF card I have in my Columbia Data Products machine only recognizes 100% ATA-2 compatible drives, which limits it to CompatFlash cards and some Maxtor hard drives. XT-IDE should work with IDE-SATA converters, but have not tested that yet.

Interestingly the card has some performance jumpers and IRQ jumpers, but those aren't used with the 1.x universal XT-IDE ROM. They are reportedly only used with the 2.x ROM, but that is still in beta.