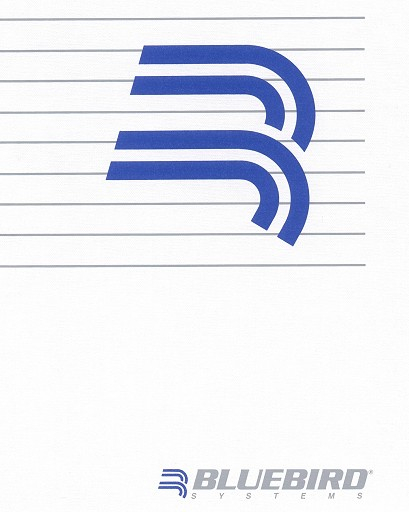 SuperDOS was first released around 1983 for 8-bit Z80 IBC/Integrated Business Computers systems, and then IBM PC systems. It grew to support protected mode on 386/486 systems. Although it uses MS/PC-DOS to install, "Protected Mode SuperDOS is a freestanding operating system that is not dependent on either DOS or the ROM BIOS.". Most applications for it are written in BlueBird SuperDOS Business Basic.

Bluebird SuperDOS was originally developed for car rental agencies and moving-and-storage companies that needed workstations at many points for data entry, but did not want to put a powerful and expensive computer on every desk.

Version 5.2A, despite its advances, still feels like an environment that hails from the 8-bit CP/M era. 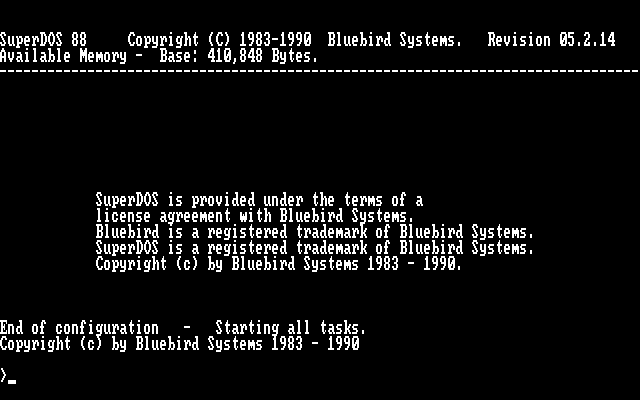 Setup is unnecessarily complicated. The manual configurations are more complicated than a tax return! ( And in the end, you still get nothing :P ) The included "SDINSTAL" disk automates most of the manual installation procedure listed in the manuals.

SuperDOS requires "building" the configuration under an MS-DOS environment. It is installed, configured, and launched from DOS, sort of like Novell Netware, although the protected mode version can boot directly. To do anything at all with this software, you MUST read the manuals.

As mentioned, SuperDOS mainly hosts basic programs, but it sounds like they are compiled to machine code. So other languages might technically be possible.

SuperDOS has two different sets of application programs. One compiled for normal double precision floating point numbers, and another for triple precision. The posted set only includes the standard double precision, except for Business Basic, which has both disks.

Supposedly this software uses a hardware dongle for copy protection. From what I can tell, it permits you to install and use it in single user mode without the donlge, but it will not start multi-user mode. I never could figure out exactly how one is supposed to start multi-user mode anyway. 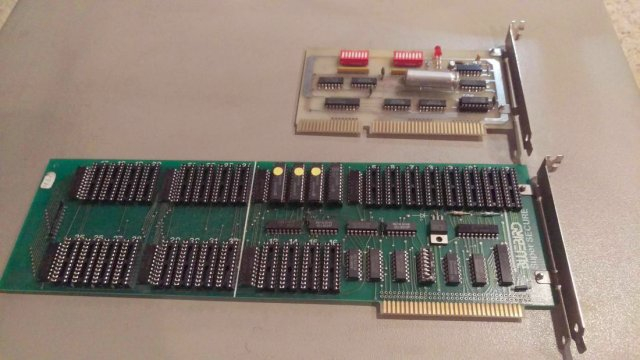 The older versions use an ISA board loaded up with serialized PAL chips to enable every little feature. The manual talks about their copy protection devices as a form of "security", which is intentionally confusing.

It hardly seems necessary, nobody in their right mind would ever copy this software! :P

The manual also talks about "hard drive" security, which almost sounds like the older versions would encrypt the hard drive. But they might just be talking more BS about their copy protection. Whatever that is, 5.2 did away with that specific requirement.

I didn't get far enough to try it, but reportedly, this software supports a limited form of multitasking with MS-DOS programs, but only locally for the console user. It sounds sort of like the kernel just runs in the background under DOS. But then it is not clear how the protected mode kernel does that since it does not "require" DOS. Some sources try to compare its multitasking to Digital Research Multitasking DOS, but that seems like a poor comparison. Its MS-DOS supports seems intended mainly to run batch files, transfer programs, or other utilities to do server related tasks.

Just a note: Not all of the floppy disks are formatted for MS-DOS. Disks formatted in SuperDOS will look as if they have an empty FAT file system if you open them in WinImage or access them directly from DOS.

So in conclusion, this is a very eccentric OS. It would have seemed very archaic towards the end of its life. It is not really useful for anything other than running specifically tailored Business Basic programs.