Well, here is another: Ensemble 1.0, from Hayden Software. 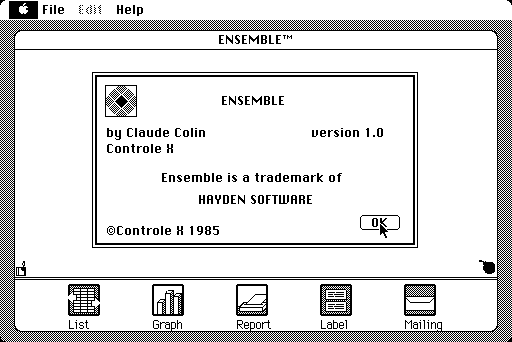 Ensemble, created by Controle X and published by Hayden Software in 1985, is an integrated office suite that includes Spreadsheet, Graphing, Word Processing, and Database functionality. It was notable as claiming to be the first integrated suite on the Macintosh, before Lotus Jazz or Microsoft Works as well as its ability to run on both the Mac 512k and the original Mac 128k.

Like many of these vintage software products, there not a whole heck of a lot out there about this product.

Controle X started off in the French market as "Macbase", a product intended to bring information management to an inexperienced market that was brand new to microcomputers compared to US markets. Macbase is supposedly identical to ensemble except for the English translation.

Hayden was just a holdings company that bought up and re-published software. Reportedly, Hayden had made a bid trying to acquire Mouseworks, but instead that got bought by Microsoft where it became Microsoft Works. 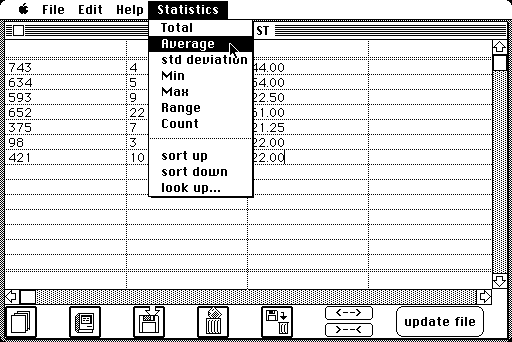 One of Ensemble's selling points was that it works on a single drive 128k Macintosh system. If you didn't mind lots of disk swapping and the inability to store or operate on any sizable amount of data.

The software is copy protected. It will run in PCE-Mac by just converting the kryoflux image to PRI format. The copy protection seems to consist of just an intentional bad sector on the second track. There is no known unprotect for this program. Given the issues with reading/writing Macintosh disks in PC drives, I'd expect that the kryoflux/scp dumps would need to be cleaned up to write a disk that works on a real Mac. Perhaps just converting the PRI back to KF. 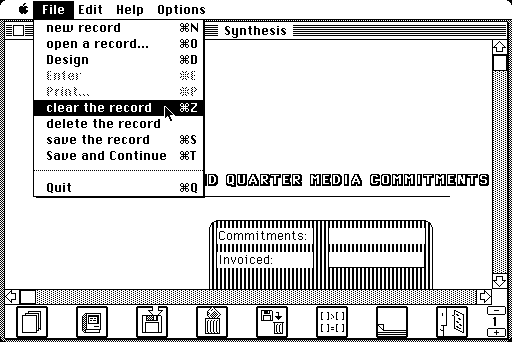 The software itself seems a little crashy, but it could just be how I had things configured.

At a glance, it comes across not so much as an integrated office suite, but rather a database with various components tacked on. What looks like a spreadsheet seems to really be part of the database. The database does have the ability to do all sorts of calculations, but this might not be what spreadsheet users would expect. 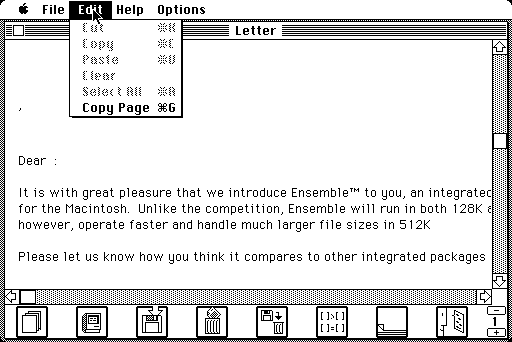 The word processor looks more like a database report editor, with only rudimentary text editing capabilities. That gives it the ability to print things like mailing lists or perhaps pull other data from the database.

The graph program can make some ok looking graphs, but is not quite as easy to use as it looks.

Over all the software is a little awkward to use and does not quite feel like most Macintosh applications. A couple of magazine reviews criticize it as not really being as "integrated" as it should be, and that each of the components is it quite as capable as existing standalone programs.

It's a little unclear if there were any updates to Ensemble. It seems like any buzz about it died off pretty quickly as other products came to market, and it never really took off.

In conclusion, I've got to stop spending so much time on Mac stuff :P