SomeGuy
April 2021 edited April 2021 in Software Spotlights
Winworld doesn't usually deal with shareware, but this is one of my old favorites

BABBLE, released in 1991 by Korenthal Associates, Inc, is a DOS based shareware program that can take multiple source input text files and create an endless stream of babble that is just as incoherent as Twitter(R)(TM)

It advertises itself as a tool to help with writer's block, but it can just be fun to see what comes out. Back in the day I used to feed in BBS chat logs, with some amusing results.

There have been increasing numbers of stories about "AI", that are able to generate streams of halfway intelligent sounding text - or even writing stores themselves.

More recently the news was touting the same AI program now used in many companies to produce huge amounts of text. but they don't even say what they really use it FOR. Probably don't want to know.

In many ways Babble is similar to those, even if much simpler. Babble uses a small set of grammatical rules to mix and match text. Modern "AI" also uses pattern matching rules, but can also use rules to build and store more complex relationships between patterns.

A common misconception about "AI" is that it possesses any actual understanding, reasoning, or intelligence. It is just a kind of software tool that can pull complex patterns out of huge data sets that might be impractical otherwise.

AI doesn't get happy, it doesn't get sad, it doesn't promise you cake, it just runs programs. When the day comes an "AI" decides to go KILL ALL HUMANS, it won't be because it hates humans, or because it judged that humans are flawed. It will be because some surrealistically large rule set had some untested case, some AI trainer in India pressed the wrong button, and billions of deaths are just a side-effect. 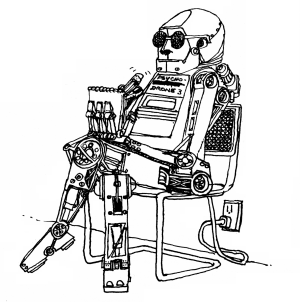 Another classic program of this genera is the famous Eliza program. A BASIC program that takes statements you enter and turns them around in to psychiatrist style questions. Winworld has a speaking version of that program called Dr Sbaitso: https://winworldpc.com/product/dr-sbaitso/2x that was bundled with Sound Blaster sound cards. 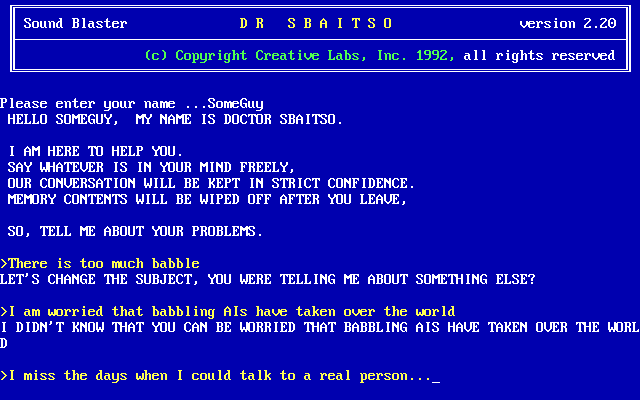 I was going to make a few more custom Babble input files to show off, but have run short on time. Lots of ideas, like feeding it AI generated clickbait stories, IA related news stories, or actual texts/tweets. One idea was to use gibberish that users have previously posted on Winworld.

Which brings me to another point - when it becomes impossible to tell the difference between an AI spambot and a regular cell phone loving 140-character twatting moron, I will assume it is a spambot and ban. It is a shame that the world has devolved so that people can't even write to the level of a 16k 8-bit BASIC program.

So please, do not post Babble babble on the forum.

When the day comes that every movie you watch (or get injected by your borg implants) is, from beginning to end, entirely created and rendered by "AI", surrealistically dry, uninspired, and built from random 1900s movie scraps, yet still better than anything on TV today, you can look back to Babble and see where it all started.

Anyway, Babble is floating around on various shareware sites, so it need not be in the Winworld library. But I am attaching it here for your enjoyment.

This post was written by an actual, obsolete, human.
Babble.zip 205.6K