SomeGuy
April 2015 edited April 2015 in Software Spotlights
ClarisWorks, first released in 1991 for the Mac and Windows is an all-in-one word processor, graphics editor, spreadsheet, and database. 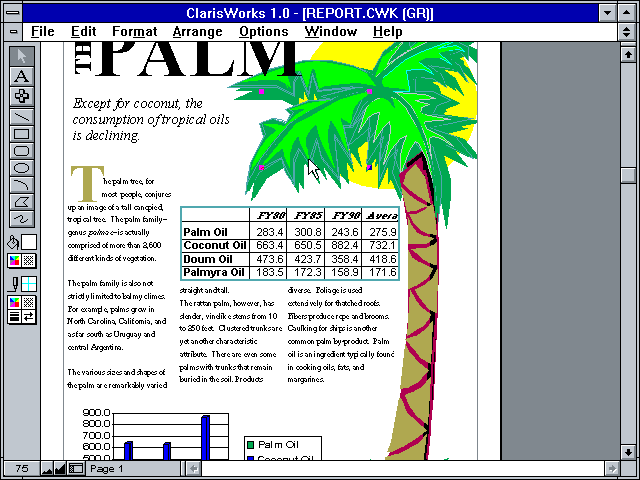 ClarisWorks competed against Microsoft Works, and reportedly did quite well with 20 million active users at one point, and ClarisWorks 2.0 being the most popular version.

It was first released in 1991 for the Macintosh, with a fully equivalent Windows version version following several years later.

ClairsWorks initially was for 68k macs, and 16-bit Windows. It later added PPC support for Mac and moved to 32-bits for Windows.

Early ClarisWorks used its own internal document integration methods, moving to OpenDOC and OLE in version 4.0.

In 1998 the ClarisWorks product was bought by Apple. Claris Corp renamed to "FileMaker, Inc" and Apple then marketed ClarisWorks under the old "AppleWorks" name.

There is a very complete history behind the product here:

I've removed several corrupt ClarisWorks images from the Winworld library. These were compressed Apple DiskCopy 6.x NDIF images that were stripped of their resource forks, which rendered them useless. Although DiskCopy 6.x NDIF data forks appear to use a form of simple RLE compression, there are no know decompressors that will work on these without the resource fork. Apparently this format stores some critical data needed for the decompression process in the resources.

It is not known what localization those ClarisWorks versions were supposed to be.

Oddly, most of the ClarisWorks versions floating around are UK English. These don't know how to spell the word "color".

If anyone would care to submit some proper dumps of normal US English versions, that would be great.