SomeGuy
November 2015 edited November 2015 in Software Spotlights
Lotus Improv was an innovative spreadsheet program that attempted to re-imagine how one would create and interact with spreadsheets. 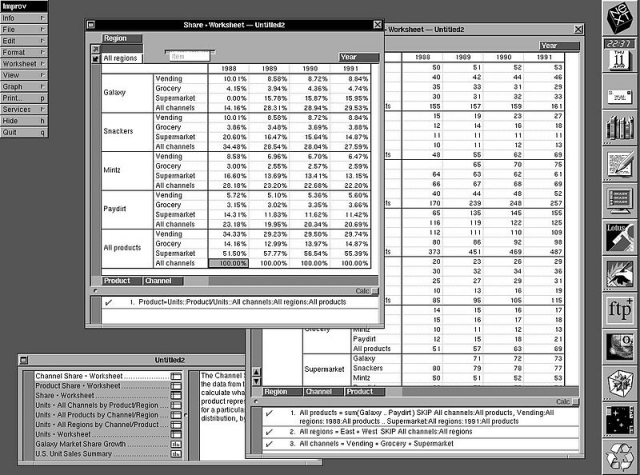 It is said that Steve Jobs really loved their prototype, and was incredibly enthusiastic about it. The Lotus developers raved about NeXTSTEP and features such as Interface Builder greatly speeding up development.

Improv was first released in 1991 for NeXT computers, and for a time became one of the NeXT's "Killer Apps". Improv's features proved popular with the financials market. 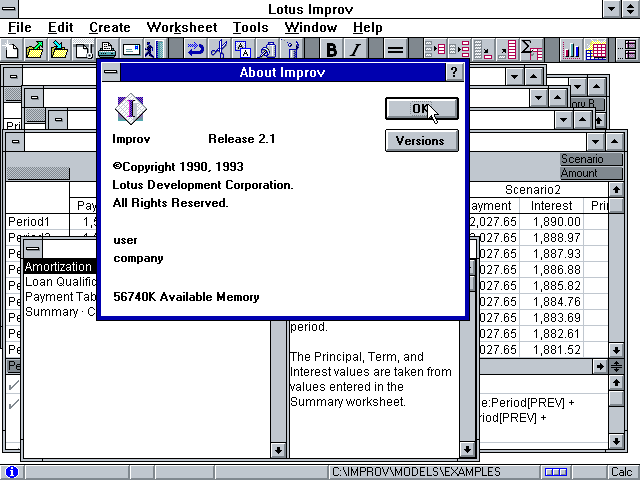 Improv was not designed or marketed as a direct replacement to Lotus 1-2-3, but rather as a tangent product. It also did not have all of the tools that 1-2-3 did. I'd suspect that having this second, significantly different, spreadsheet may have caused some market confusion.

As a result, 1-2-3 remained dominant until both were overtaken by Microsoft Excel.

Improv features included multidimensional rather than position oriented modeling, formulas separated from the spread sheet data or design, formula items given English names rather than arbitrary cell names, the ability to work with sets of data, the ability to collapse or expand groups for different levels of detail, and the built in ability to create graphs and presentations. (Hopefully that makes sense, I'm not too familiar with these features)

Spreadsheets are also created differently. In Improv you start by defining how your spreadsheet is supposed to work, instead of just plopping in data.

Lotus did not merge these advanced features in to 1-2-3. But rather it later re-positioned Improv as an "add-in" for 1-2-3.

Improv 2.1 was the last version and work on Improv 3.0 was canceled. The product was officially killed after IBM purchased Lotus.