SomeGuy
July 2015 edited December 2018 in Software Spotlights
One might forget that web browsers were once commercial products sold in boxes on store shelves. At the first release, Netscape Communications Corporation took an unusual step of both selling their software in stores and making their software available free for personal use. 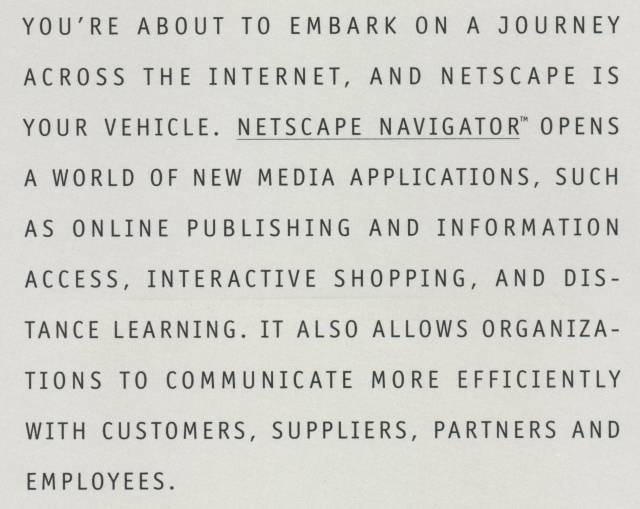 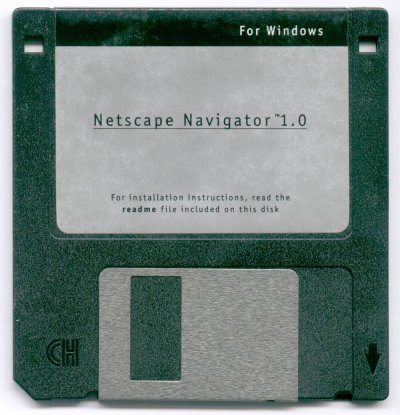 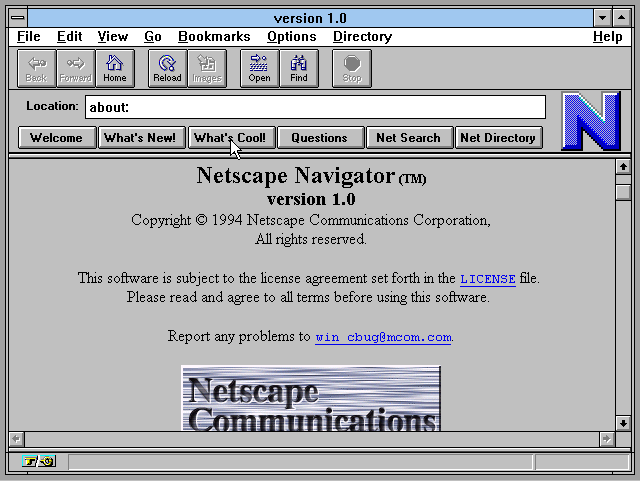 This version is Netscape Navigator 1.0, as distributed commercially. The free downloadable/evaluation version was branded as "1.0N", although it was supposedly functionally identical.

At release, Netscape Navigator competed against the NCSA Mosaic web browser. Although both Netscape and its founder had roots in Mosaic, it was envisioned as a product that would stomp Mosaic - resulting in the internal codename "Mozilla".

Netscape 1 offered a number of advantages over Mosaic including:

* You can see and interact with the document as it loads.
* Multiple images and text can all load at the same time.
* JPEG images are supported, to improve performance.
* Document and image caching reduce network traffic.
* The graphical user interface is tuned for ease of use.
* Advanced features include hierarchical bookmarks and a configurable graphical user interface.

The ability to see the page render as it loaded was a huge deal back then for dial-up users. (Wait, I still have to wait 5 minutes for 10000 bloated scripts to load on many sites before I can actually see or do anything. Well, after dismissing the popovers and working around advertising for Facefook and Tweeter)

Netscape Navigator 1 was available for a number of platforms including:

These were shortly followed by 1.1 releases for 32-bit Windows and a new upstart OS: Linux.

The specific release shown above is a 1.44mb floppy disk image and a PDF manual for 16-bit Microsoft Windows.

1.0 won't actually load any pages from today's Internet. All current web servers add a character encoding field to the page mime type, and Netscape 1.0 doesn't know what to do with that.

The revived http://home.mcom.com/ , which is linked to extensively in Netscape 1.0, used to serve up the pages in a way that 1.0 could recognize. However probably some random server update undid that tweak and no one noticed.

I'm not aware of any current complete Netscape archive. There used to be a large archive on the SillyDog web site: http://sillydog.org/narchive/ but many links have gone dead. I don't know if anyone ever mirrored the entire content of ftp.netscape.com, but with all of the different platforms multiplied by different languages and numerous point releases, that was insanely HUGE! Since those were freely distributable, there is no reason for Winworld to host those, however in time we would like to add commercial media images and historically significant versions.

There is also some more information about the 1.x or earlier versions here:
http://www.sinica.edu.tw/www/netscape/t ... lient.html
http://home.mcom.com/home/faq_docs/faq_client.html