SomeGuy
August 2016 edited October 2016 in Software Spotlights
Harvard Presentation Graphics A.00 is the very first version of the once popular graphing software "Harvard Graphics". It was much easier to use than its competition, but this initial version was most notable for its copy protection scheme. 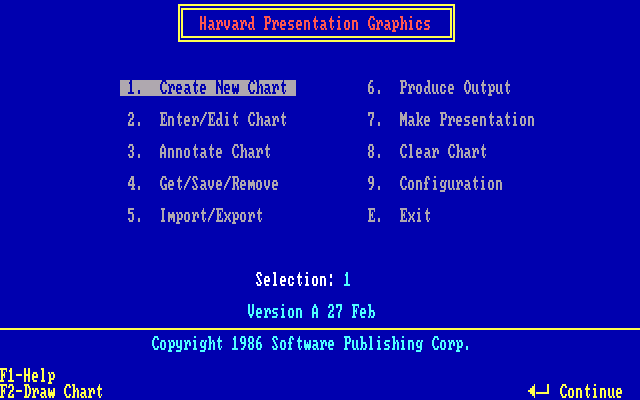 HPG provided an easier, friendlier, way to create high quality business graphs and slide shows. At release, it competed against many graphing products such as PFS:Graph (AKA IBM Graphing Assistant ), Microsoft Chart, ChartMaster, and Cricket Graph, just to name a small few. A Windows port was released in 1991, but it lost out to Microsoft Powerpoint.

There is a comprehensive list of presenting/graphing programs in the September 22, 1986 InfoWorld 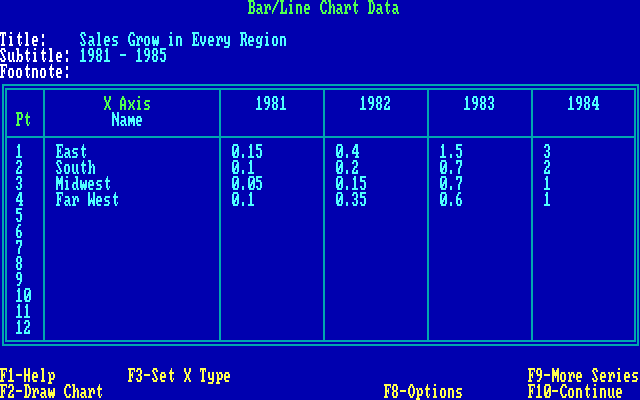 This software is designed for IBM PC/XT PC/AT and compatibles. Requires MS-DOS 2.0 or higher, 256K ram or 386K for VDI devices, and a hard disk or two floppy drives. Supports Hercules, EGA, and CGA graphics. 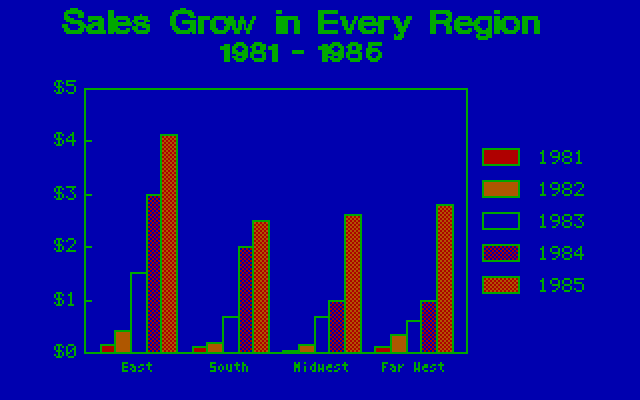 Software Publishing Corporation products used an odd letter-based version numbering system. For example, you might have versions A:00, A:01, A:02, B:00, B:01, and C:00. Sometimes they use a colon, but in this product they use a period. In this case "A.00", or just "A" means it is version "1.00". This style was dropped and the product name shortened for the release of "Harvard Graphics 2.0".

Much software of the day implemented copy protection, however businesses were increasingly looking to minimize risk and trouble by investing their money on non-protected titles instead.

Despite that, Harvard Presentation Graphics A.00 used an odd protection scheme.

To use the software from floppy, the copy protected program disk must be in the A: drive. Back in the day this would have been a pain if you had a 3.5" drive as A: and a 5.25" as B:.

You are permitted to install the program to a hard drive only 5 times, and the protection keeps track of this.

The protection method stores the text "SPC1986" in the gap area immediately following sector data. This is present on sectors 1-5 on both sides of cylinder 5.

On a real floppy drive, the post-sector gap acts as a cushion while writing individual sectors. A drive may spin a little too fast or too slow. If it is a little too slow then it will overwrite some of the gap data, and if it too fast it will leave extra garbled data in the gap. This helps prevent the system from overwriting the beginning of the next sector.

It is possible to read this data by using a special "diagnostic" track read. However, a normal floppy disk controller can not write specific data to this area.

To run from a floppy, the protection only checks one of these sectors.

However when you perform an installation, it WRITES to one of the five sectors on head zero, clobbering the "SPC1986" message that follows it. There is no way to undo this (Unless you are me! :P ) and the remaining sectors indicate how many installs are left. You can think of this like punching out one of five slots on a paper ticket.

It insists on performing a "de-installation" before you are permitted to re-install. This does not seem to do much, as it does not and can not "reclaim" an installation. You can satisfy the de-install tool simply by pointing it to an empty hard drive root directory. This may be to handle the case where a customer's hard drive has been replaced.

Once installed to the hard drive, it does not require the floppy to be in the A: drive. But the installation is protected against file copying. It appears to record the application's physical cluster location on the hard drive. This was a common protection method, but disk defragmenters totally screw this up.

Interestingly, during the install or de-install process it warns that you should not use a 1.2mb floppy drive. Writing to a 360k disk in a 1.2mb drive can sometimes muck things up. But the odd part here is most IBM PC/AT users would have had a 1.2mb drive as their A: drive.

The copy protection seems to fail on later AT class computers. It may be a controller compatibility issue, but I'm not 100% sure. I did successfully test this on several XT class computers.

Using the following commands I was able to make a PSI image that works in the PCE emulator:

What the above does is store 1024 bytes for each protected sector (1-5 on both sides of cylinder 5) but the sector size is still reported as 512 bytes, this preserves the "SPC1986" message after the data.

This enables you to run HPG from the floppy disk, however it will not successfully install to a hard drive. This may be due to the "perfect" emulation of the floppy drive, which makes it impossible to randomly clobber the GAP data like a real floppy would.

As far as I can tell, no unprotect exists for this version.

This is likely because several months after the release of A.00, SCP released A.01. This was a minor update that did away with crazy copy protection.

Harvard Graphics became extremely popular in the DOS world of the late 1980s. If you wanted to graph something on DOS, that was the program you would leech^H^H^H^H^H buy.

A Microsoft Windows version was released in 1991, however in the Windows world Microsoft PowerPoint had beat it by about a year and had already gained market traction.

In 1996 it was purchased by Serif, and interestingly it seems they still sell some versions of it: http://www.serif.com/harvard-graphics/