Yesterday, I received a package from Digi-Key with the items that I purchased on Friday:

4x 22uF 6.3V tantalum capacitors (SMD)
10x 0 Ohm resistors (too small)
2x 0 Ohm resistors (too darn small)
2x 3.3V Fixed Voltage Regulators
2x Voltage Regulator mounting kits
2x CR1220/BR1220 battery holders (one is on the board and accidentally cut the legs off since I thought it would touch the bare metal on the case, and I was wrong)
5x 128Kb 28-pin DIP 12ns cache chips (not working since the board only supports 20ns and 15ns SRAM chips).

Did the modifications on my Packard Bell PB450 motherboard (Packard Bell Pack-Mate 28 Plus), however, I didn't solder the battery holder very well and accidentally trimmed the legs off. Good news is, I bought two of them, same thing with the capacitors, fixed voltage regulators, and the VRM mounting kit. As also seen in this forum: https://www.vogons.org/viewtopic.php?f=46&t=60556&start=140#p711422

Voltage regulator mod (cleaned the rest of the flux off, mostly after the picture was taken): 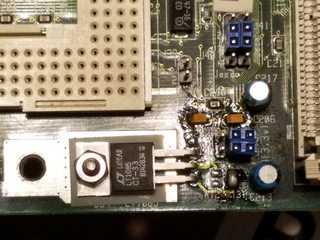 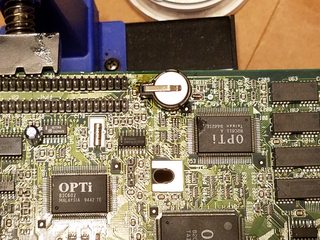 Granted my soldering isn't that great, but, it has improved, and thankfully, I still have a ton of flux left and a few wrapped up solder braid, which did get the old solder off in order for me to install the voltage regulator.

The battery holder that's installed got a lot of the flux cleaning chemical on there, so I'm going to replace it with the spare I bought and the system says the battery is dead and the one thing I wish I had was a 3.3V DX4-100 processor to make sure I got the connections set and that the voltage is spot-on and adjust the soldering if necessary.