SomeGuy
July 2021 edited July 2021 in Software Spotlights
LANLink (no relation to LapLink), produced by The Software Link of Norcross, Georgia, is a low cost networking program that is optimized for, and exclusively uses, common serial and parallel port connections. 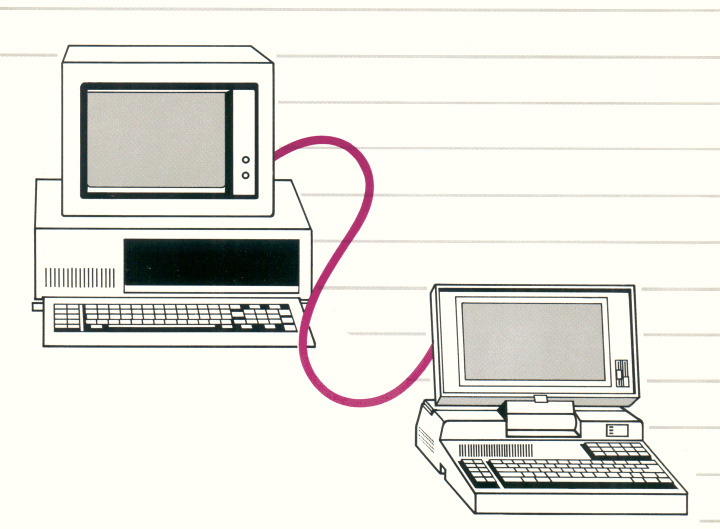 LANLink was targeted at users with a small number of computers that needed to continually share data between machines without then-expensive network cards, or laptops that could not use expansion network cards.

Programs like Laplink, or MS-DOS INTERSERV were easier to use, and did not require resident programs. For users that only needed to copy something and go, those worked great. But for users that needed to continuously share resources, constantly copying things back and forth could be a headache.

LANLink behaves just like a local area networking program, enabling the user to share a drive on one machine and map it to a drive letter on another.

This lets you use DOS commands such as COPY, DEL, or RENAME directly on the files. You can run programs from the shared drive directly (although that may be rather slow). You can open word processing, databases, or spreadsheet files without copying them locally first. You may even be able to access files (such as database) that are larger than your local disk storage.

To copy a file, for example, just type:

Or use your favorite DOS file manager shell.

Since you are tying up a serial or parallel port, and can't just switch printer cables around, LANLink also supports redirected printing over this connection.

Many DOS based LAN products of the time were badly bloated and often did not leave enough free RAM to run many of your programs.

Because LANLink is exclusively for serial/parallel it does not need to implement a generalized network card driver interface, or implement a huge protocol stack such as TCP/IP. This means you still usually have plenty of RAM to run your DOS programs.

The LANLink server can run in the background of a non-dedicated DOS computer. Given the stability of DOS software, a dedicated computer might be preferable.

The full LANLink product can support many users from one server. It is only limited by the number of serial ports that you can add to the machine. The full product can also make use of multi-port adapter cards, which were not too uncommon at the time.

Unlike ethernet, you can not daisy chain additional machines, or otherwise grow the network beyond the number of ports on a server. 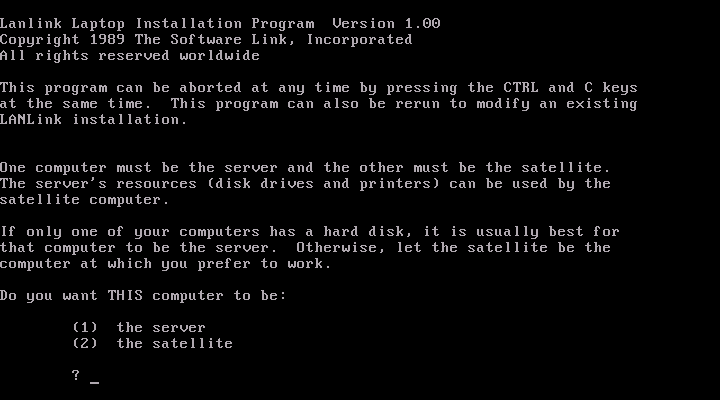 The product archived here right now is the "LANLink Laptop" product which is limited to one client and one server. The box includes 3.5" disk, 5.25" disk, and a special parallel-to-parallel connection cable.

As for current uses, something like this could be handy to access drive on a vintage system at the file level, from a more powerful machine with more storage. Or it could be used from a vintage system to access a large drive where one could then store or load hard drive images using DOS based imaging program.

It seems like it competed mostly with LapLink, but some other LAN products, such as Lantastic-Z that could use a serial or parallel port instead of a Network Interface Card.

A couple of notes: This version doesn't like fat32 server drives. It partially works, but has issues. Also, I think the LANLink parallel cable is the same as a "Laplink" parallel cable, but I have not tested that. Of course, serial just uses a standard nullmodem cable. Speedwise, the "8-bit" parallel port access speed is not blazing fast but for DOS use it not incredibly slow either.

So, compared to LapLink or an ethernet network, LANLink has a few advantages, but also plenty of disadvantages such as speed or expandability.

Still, I have heard people ask for programs like this before. Its specific usefulness is debatable, but now it is another option that is out there.

If anyone has any of the full versions of this program, it would be great to add here.