Thanks to Thinkpadman for uploading disk images of version 1.3!

I also scrounged up an installed file set of 2.4. 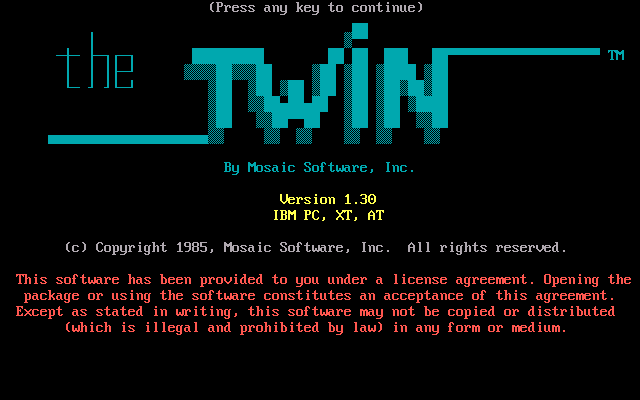 Unlike Lotus 1-2-3 release 2.0 that it competed against, The Twin had better graphics, a much lower price, and was not copy protected. It was a little slower than Lotus 1-2-3, but this was less of an issue for budget users.

The Twin had significant market success during the late 80s. However The Twin, along with Paperback VP-Planner and Borland Quattro Pro were the subject of a lawsuit claiming that duplicating the "look and feel", mainly the menus, violated Lotus's copyrights.

The 1990 ruling upheld Lotus's copyright. And in 1991 a judge issued a permanent injunction against Mosaic Software, prohibiting the company form selling its spreadsheet. (InfoWorld Aug 10, 1992)

It is a little unclear precisely what happened to Mosaic Software after that, however sufficed to say they are no longer around.

Mosaic software did have several other products including "Chartman", "Integrated-7", and "Diamond".

Reportedly, Leading Edge bundled "The Twin" with their Model D, but halted bundling after the suite was filed.

Quatro Pro survived Lotus's suite in part because their Lotus-compatible menus were an optional component, which they were able to simply drop.

Lotus 1-2-3 was itself a clone of Visicalc. However, Visicalc 1.x didn't even have menus, Just a command field!

Microsoft Excel 1.x/2.x did not use Lotus style menus, so probably avoided that mess.

The entire "Look and feel" thing was a big deal at the time, with Apple suing others mimicing elements of their Macintosh GUI.

Obviously, later rulings and such held that command menus were "uncopyrightable".

And possibly because they were too busy suing people, Lotus didn't port their product to Microsoft Windows in time, and got buried by Microsoft Excel. :P