SomeGuy
August 2017 edited August 2017 in Software Spotlights
Apparently Microsoft is planning to remove Microsoft Paint from Windows 10. I thought this would be a good time to show off its origins as PC Paintbrush from the small Marietta, Georgia based company ZSoft.

But let's step back a little further first: 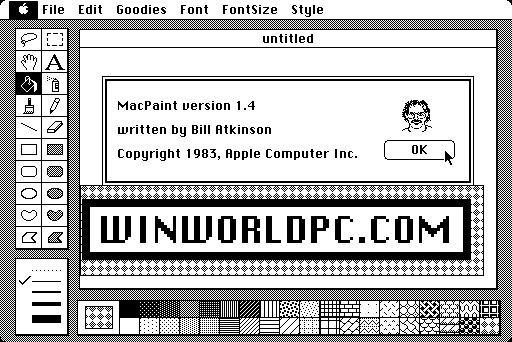 The story really starts with Apple MacPaint. It was designed as a simple and easy to use bit-mapped drawing tool. In contrast, many others were shape/vector based drawing programs. MacPaint stood out among other drawing programs of the time, making them look clunky in comparison.

My own observations was that the unique simplified yet powerful user interface combined with the simplicity of black and white screen drawing resulted in a tool that was very artistically inspiring.

But most importantly to this story, many created similar looking clones. 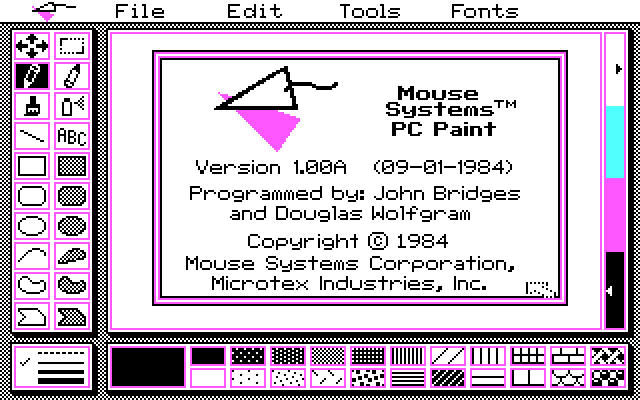 Despite the similar name, it has no direct relation to PC Paintbrush. 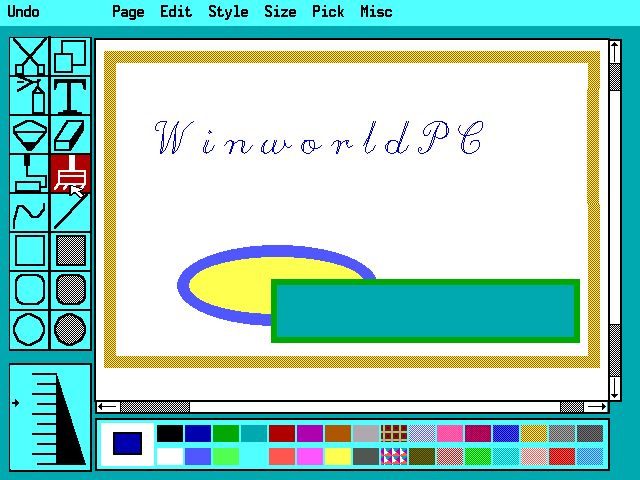 The earliest versions I have been able to find so far are 3.x. It would be great if we could find some earlier releases. (Note that confusingly Publisher's Paintbrush uses a different version numbering sequence, even though it is almost the same thing as PC Paintbrush. Also note that the Microsoft OEM uses yet another version numbering)

A November 1984 advertisement can be seen in this PC Magazine: https://books.google.com/books?id=-Ukz6 ... &q&f=false

I just added version 3.77, dumped from original media. I'd recommend taking a look at the flyers included with the manual. There is some good information about ZSoft Publishers Type Foundry, and it suggests there was a version of PC Paintbrush for OS/2 1.1.

PC Paintbrush was notable for supporting virtually every single IBM PC video card produced prior to its release date. Between all the different DOS versions currently on Winworld, there is support for: 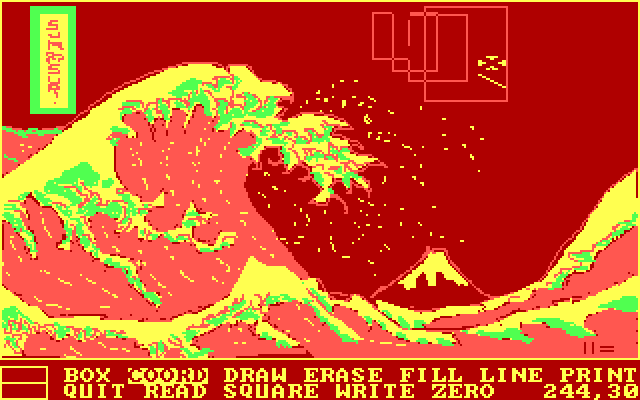 Now, here is where things start to get interesting. After Mouse Systems released their mouse products to the market, Microsoft began producing their own mice. 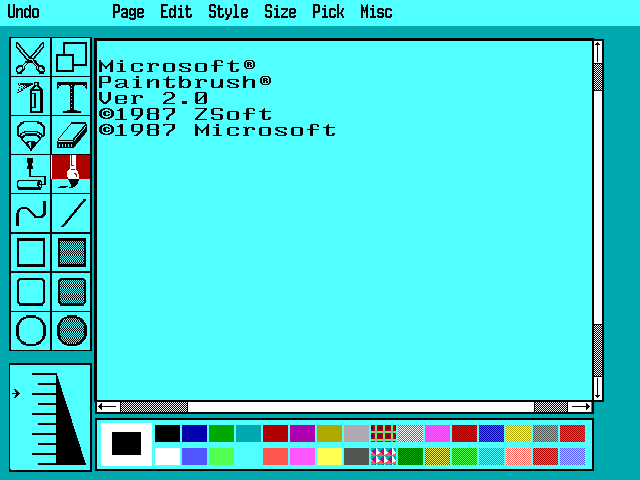 Microsoft needed a better drawing program to compete with Mouse Systems, so they licensed PC Paintbrush.

It looks like it first shipped with the 4.0 mouse drivers, but if there was a 3.x driver release, we seem to be missing that. It continued at least up to the 7.0 mouse driver in 1989, which included both an enhanced DOS version and a Windows version. 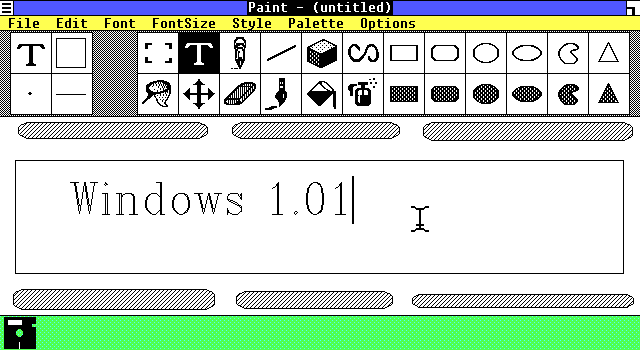 This appears to have been written entirely by Microsoft ("Microsoft Paint (c) 1985 Microsoft Corp. by Dan McCabe, et al"). And it probably evolved from the sample paint program shown off in earlier versions. 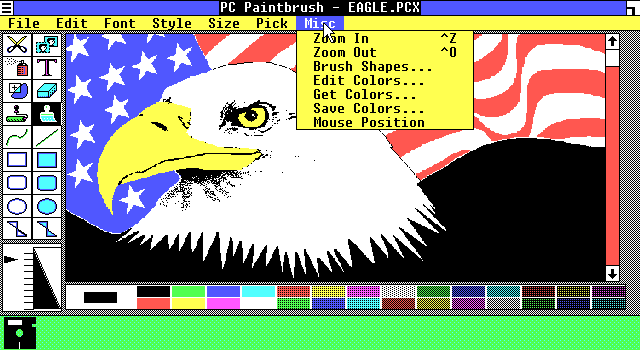 Luckily for Microsoft, ZSoft ported PC Paintbrush to Windows. Although probably targeted at Windows 2, it also ran under Windows 1.

An interesting technical note: Neither Windows 1 nor 2 support color Device Independent Bitmaps internally. To draw with color bitmaps, PC Paintbrush for Windows had to use EGA and VGA specific device dependent hacks. 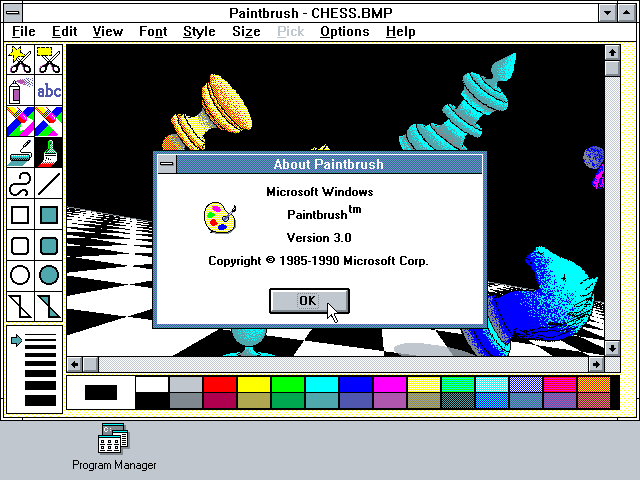 Finally, starting with Windows 3.0, Microsoft bundled PC Paintbrush as a standard component of Windows itself. 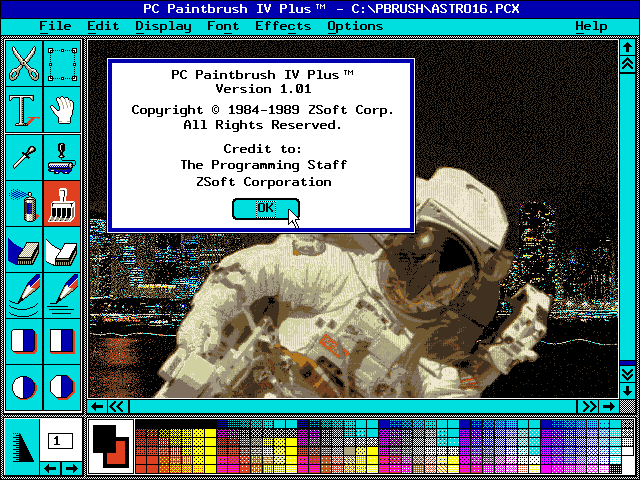 ZSoft continued to enhance their products, however these enhancements did not find their way back in to Windows. PC Paintbrush IV and 5 for DOS add many new features. 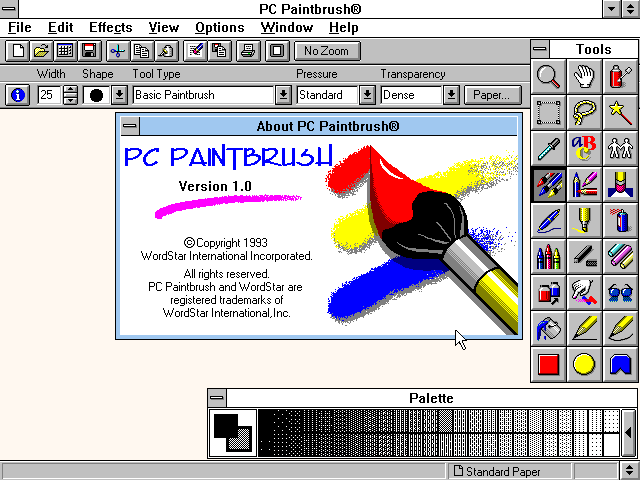 There also was a much later Windows product sold by SoftKey under the name PC Paintbrush. It is so different, it is unclear if it is really even related to the original ZSoft product.

It could be that Winworld is missing some intermediate Windows 3.x retail PC Paintbrush releases. 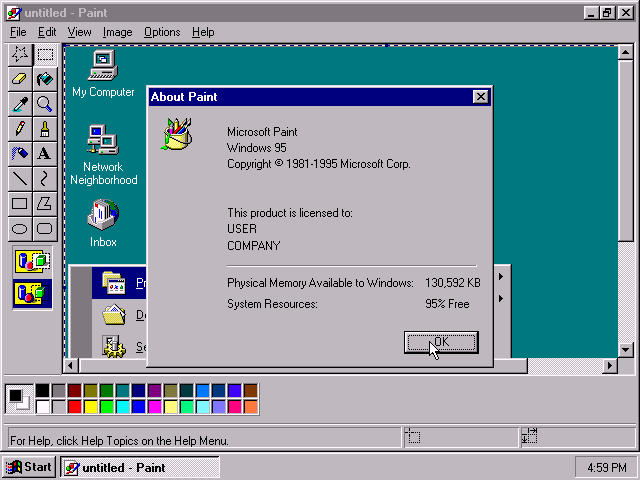 In Windows 95 and later, the Paint application underwent some rewrites and revamps, but retained the same basic user interface and capabilities. It resumes the use of the name "Microsoft Paint" rather than "Paintbrush".

Microsoft Windows Paint became important as a "standard" part of Windows. If you or your users needed to open and edit quick image, you could rely on it almost always being there.

In fact, it grew a bit of a reputation for its primitive abilities. Yet as a standard component, was still considered quite useful.

It even gained a bit of a following from users taking the limited abilities as a challenge to create artwork. Often as a tool for creating "meme" rage comics. 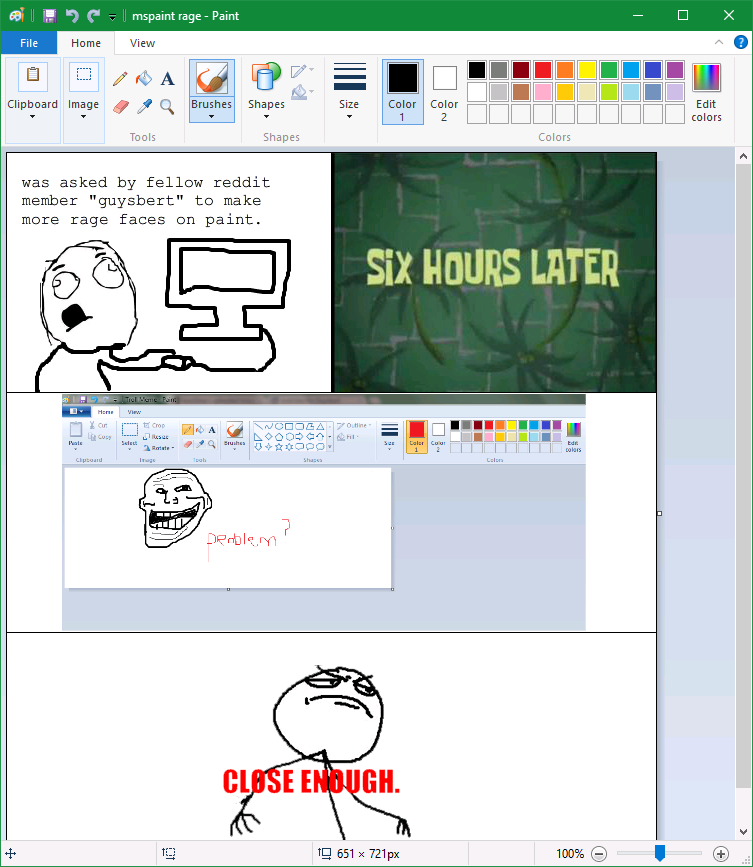 Windows Vista Paint was the last one with proper menus.

Finally, with Windows 10, Microsoft has vowed to remove Paint. No, not in the next Windows release, but as part of a Windows 10 "update". While a replacement is long overdue, it is simply stupid of Microsoft to change major features in a released product. (Yea, yea rapid release, continual updates, no new Windows versions, that is also stupid). 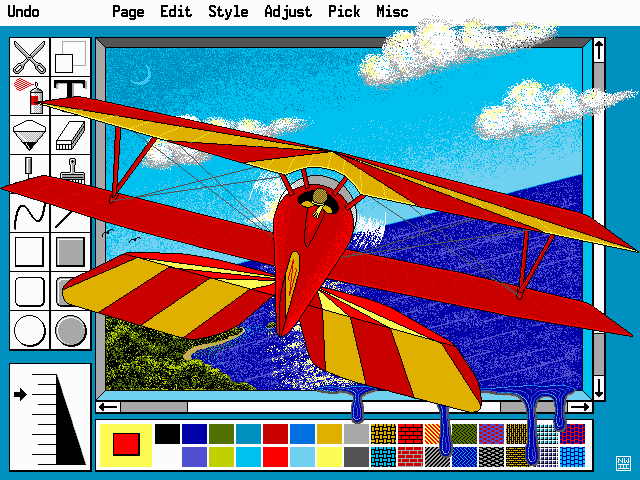 Personally I find ZSoft interesting, as their headquarters used to right up the street from me. Currently there is a business named "AlphaGraphics" there that may or may not be related.